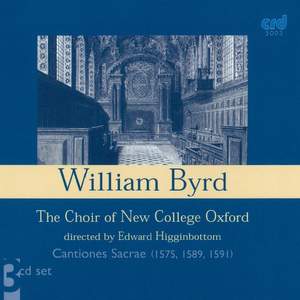 Within the earlier part of his long career William Byrd published three volumes of Cantiones Sacrae – sacred songs to Latin words. The first, in 1575, was a joint venture with his master Thomas Tallis, each composer contributing seventeen items. The others, called by Byrd the ‘Uber primus’ and ‘Uber secundus’ of sacred songs, appeared in 1589 and 1591; they contain respectively sixtee n and twenty-one items (several of them being in two or more se parately numbered sections). The present set of three CD’s contains a generous selection of items from these three collections. The first disc also includes three of Byrd’s keyboard pieces, interspersed with the vocal music.