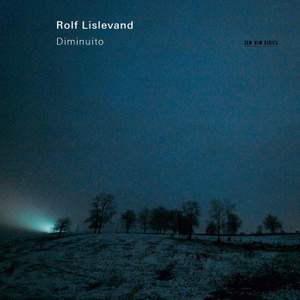 Lislevand and his colleagues manage to create music that sings and is full of grace, feeling and lyricism...these fine performances - fresh, animated, elegant and virtuosic without being flashy... — BBC Music Magazine, April 2010, 4 out of 5 stars More…

Following his highly successful ECM debut with Nuove Musiche in 2006, the new CD by Norwegian lutenist Rolf Lislevand and his group of international early music virtuosi is an album of melodic beauty and rhythmic energy that transcends the genres and is likely to appeal to listeners from different backgrounds including early music, jazz and ethnic music.

Lislevand is one of the most charismatic figures in today's early music scene and an outstanding lute virtuoso whose vigorous music making is firmly rooted in scholarship. Here are stunning improvisations based on vocal compositions from 16th century Italy: the birth of instrumental virtuosity out of embellished song. His creative and delightful approach to rarely heard repertoire is comparable to Christina Pluhar's work with L’Arpeggiata but is even more original in its concentration on lesser known composers.

Once again putting a strong emphasis on improvisation, Lislevand and his colleagues disclose the astounding modernity and emotional wealth in the music of composers such as Giovanni Antonio Terzi and Joan Ambrosio Dalza. Most of the music stems from the Veneto region of Italy where, at that period, strong influences of oriental and eastern music could be felt. Lislevand's group translates this with a lush scoring for deep instruments, both stringed and plucked, and adds to the line-up two sopranos, Anna Maria Friman and Linn Andrea Fuglesth, from the immensely popular a-cappella group Trio Mediaeval.

Lislevand and his colleagues manage to create music that sings and is full of grace, feeling and lyricism...these fine performances - fresh, animated, elegant and virtuosic without being flashy - are utterly persuasive.

everything's done with such evident awareness of the style of the period, not to mention panache, that it's nearly always possible to suspend disbelief...One has the impression of musicians...who may actually have experienced jazz from the inside, rather than slapping it on modishly...And the playing's simply superb.