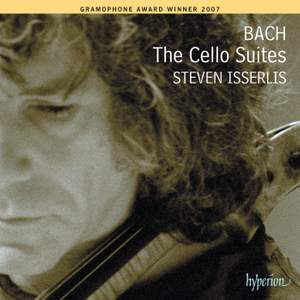 anon.: The Song of the Birds

I. Prelude, from the Anna Magdalena manuscript

I. Prelude, from the Johann Peter Kellner manuscript

I. Prelude, from the collection of Johann Christoph Westphal

Also includes "The Song of the Birds" arranged by Sally Beamish and different versions of the Prelude to the first suite from the manuscripts of Anna Magdalena, Johann Peter Kellner and the collection of Johann Christoph Westphal.

Isserlis has done the impossible. He has given the listener something new, and indeed something outstandingly good...He suggests that their expressive journey marks them as “Mystery Suites”, travelling from the nativity...to the Resurrection...Unusual as the decision is, it does work.

Steven Isserlis clearly venerates Casals as an important figure in the suites' history, even paying touching homage to him by appending a performance of a Catalan folksong. Like Casals, Isserlis bided his time before committing them to disc, and he has looked for interpretative guidance to extra-musical ideas.
Isserlis proposes a detailed concept. For him the Suites suggest a meditative cycle on the life of Christ, rather like Biber's Mystery Sonatas.
He points out that this is 'a personal feeling, not a theory', but it has to be said that once you know that he is thinking of the Agony in the Garden during the darkly questioning Second Suite (the five stark chords towards the end of the Prélude representing the wounds of Christ), the Crucifixion in the wearily troubled Fifth or the Resurrection in the joyous Sixth, it adds immense power and interest to his performances.
But then, this is also the most wonderful celloplaying, surely among the most consistently beautiful to have been heard in this demanding music, as well as the most musically alert and vivid. Not everyone will like the brisk tempi (though the Allemandes, for instance, gain in architectural coherence), but few will fail to be charmed by Isserlis's sweetly singing tone, his perfectly voiced chords and superb control of articulation and dynamic – the way the final chord of the First Prélude dies away is spellbinding.
There are so many other delights: the subtle comings and goings of the Third Prélude, the nobly poised Fifth Allemande, the swaggering climax that is the Sixth Gigue – to name but a few. Suffice to say that Isserlis's Bach is a major entrant into an already highly distinguished field, and a disc many will want to return to again and again.

…this… the most wonderful cello-playing, surely among the most consistently beautiful to have been heard in this demanding music, as well as the most musically alert and vivid. …few will fail to be charmed by Isserlis's sweetly singing tone, his perfectly voiced chords and superb control of articulation and dynamic - the way the final chord of the First Prélude dies away is spellbinding.

the stuff of legend

Isserlis is a passionate musician, but never thoughtless or frivolous, and the delicacy of his responses on this wonderful set sometimes take the breath away. If your soul fails to quiver in the quiet depths of the fifth suite’s sarabande, then you must be a robot in disguise. Yet he’s not on his knees
always worshipping: time and again Isserlis asserts the music’s dance roots, whether through his thrusting accents or by sweeping through with a winning lilt … Just listen to Isserlis, Bach and your heart, and the music that never dies