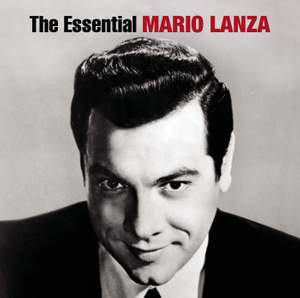 Compilation includes all Lanza’s popular hits including ‘Be My Love’ and ‘Because You’re Mine’ plus opera arias he sang in The Great Caruso and all his most beloved Italian songs.

Irving Aaronson, Paul Francis Webster: The Loveliest Night of the Year (From "The Great Caruso")

Rodgers, R: Carousel: If I Loved You

Brodszky: Beloved (from 'The Student Prince')

Robert Craig Wright, George Forrest: And This is My Beloved (from "Kismet")

Rodgers, R: Spring Is Here: With A Song In My Heart

Romberg, S: Softly as in a morning sunrise (from The New Moon)

Schertzinger: One Night of Love

Mario Lanza possessed probably the most beloved and enduring tenor voice in the history of recorded music. Lanza could have been one of the greatest opera singers of his time, but he chose to focus his career instead on a series of hugely popular MGM films and in concerts and chart-topping recordings. He became one of the great singing stars of the 1950s, and his signature hit was the soaring ‘Be My Love’. Lanza died before he was 40, but he left a rich, vibrant legacy of recordings, everything from the popular opera areas to the popular hits of his time

“the greatest voice of the 20th century.” Arturo Toscanini