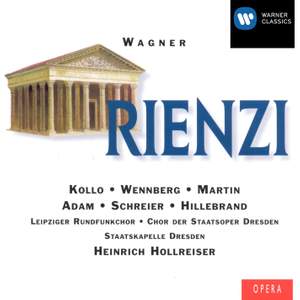 Rienzi is grand opera with a vengeance. Political imperatives count for more than mere human feelings, and politics means ceremony as well as warfare: marches, ballet music and extended choruses are much in evidence in this work, while even the solo arias often have the rhetorical punch of political harangues. It could all be an enormous bore. Yet the young Wagner, basing his work on Bulwer Lytton's story of the tragic Roman tribune, did manage to move beyond mere tub-thumping into a degree of intensity that – for those with ears to hear – prefigures the mature genius to come. In the end, Rienzi himself is more than just a political animal, and the existential anguish of Tannhäuser, Tristan and even Amfortas can be found glimmering in the distance. This performance isn't ideal in every respect, either musically, or as a recording. But its virtues outweigh its weaknesses by a considerable margin. Siv Wennberg was not in best voice at the time, but the other principals, notably René Kollo and Janis Martin, bring commendable stamina and conviction to their demanding roles. Above all Heinrich Hollreiser prevents the more routine material from sounding merely mechanical, and ensures that Rienzi has a truly Wagnerian sweep and fervour.