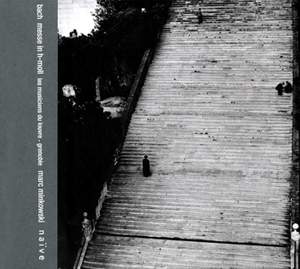 Minkowski comments that 'Bach turns everything into an orchestra'; his mind is 'symphonic'. As a result, the singers are required to match the instrumental virtuosity of players, as they do... — BBC Music Magazine, September 2009, More…

Christe eleison (Soprano I and II)

Last year, the esteemed conductor Marc Minkowski joined Naïve for a long-term collaboration during which period he will be recording the music of Bach, Handel, Haydn and Mozart, among others. The first in this series of recordings featured the works of Georges Bizet performed on instruments of the period. It was a major international success, and was picked as an Editor’s Choice in the Gramophone and a Music Choice in the BBC Music Magazine.

Early in 1733 Augustus II, King of Poland and Elector of Saxony, died. Five months of mourning followed, during which all public music-making was temporarily suspended. Bach used the opportunity to work on the composition of a Missa, a portion of the liturgy sung in Latin and common to both the Lutheran and Roman Catholic rites. His aim was to dedicate the work to the new sovereign Augustus III, a Catholic, and by doing so to hope to improve his own standing. The Missa was first performed in 1733 during the festival of the Oath of Allegiance to Augustus III. It consisted of settings of the Kyrie and Gloria that now comprise the first part of the Mass in B Minor. At what point Bach decided to expand the Missa into a full-blown setting of the Catholic Mass is not known. Some researchers believe that the Symbolum Nicenum (or the Credo) was composed between 1742 and 1745, but others think it predates the Missa and was first heard in 1732. The remaining parts (Sanctus, Osanna, Benedictus and Agnus Dei et Dona nobis pacem) were all added in the late 1740s. The Mass in B Minor did not assume its final form until Bach's last years, perhaps by 1748. It may be that Bach wished the Mass in B Minor to be regarded as a monument of his skill, for it is a work based much upon his earlier music, which he adapted and refined to meet a sacred purpose.

Minkowski comments that 'Bach turns everything into an orchestra'; his mind is 'symphonic'. As a result, the singers are required to match the instrumental virtuosity of players, as they do with breathtaking effect in 'Et resurrexit', 'Et expecto'. Recording quality, in a warmly reverberant churn in Santiago de Compostela, matches the performance, making this the best of the minimalist B minor Mass recordings.

The most outstanding aspects of this performance involve the linear focus and Minkowski's musical instinct to draw out the imagery with discrimination… The large-scale movements with trumpets and drums are wonderfully exuberant exclamations, especially the "Gloria" and "Et expect", roulades of joy which never tire.

Minkowski’s Bach is less mannered than his Handel, but there is drama and brilliance in the singing and playing he encourages from his period-style forces. Highly collectable.

...the shifting permutations of colours constantly take you by surprise. The end result is as much a celebration of the joy of music-making as a hymn to the glory of God. Wonderful and highly recommended.

Marc Minkowski chose his 10 international soloists - who combine to sing the choral sections - with infinite care. Their balance is superb, aided by his sensitive direction of the sublime Musiciens du Louvre who never overwhelm the vocal lines. Among many glorious moments the "Et Incarnatus est" and "Crucifixus" stand out as particular peaks of perfection

The adrenalin and excitement is real, and there’s lovely colouring from brass and wind.

The Independent on Sunday 14th June 2009

Using forces identical in number to those in The Gabrieli Consort's St Matthew Passion, Minkowski delivers an elegant reading with as many reflective largos as lickety-spit allegros.