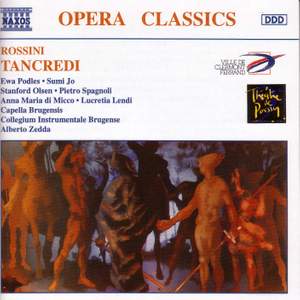 Tancredi is a seminal work in the Rossini canon, mingling a new-found reach in the musical architecture with vocal and instrumental writing of rare wonderment and beauty. The singing is splendid... — Gramophone Classical Music Guide, 2010 More…

Tancredi is a seminal work in the Rossini canon, mingling a new-found reach in the musical architecture with vocal and instrumental writing of rare wonderment and beauty. The singing is splendid throughout, with a cast that's unusually starry. Podles has sung the role of Tancredi to acclaim at La Scala, Milan; the Amenaide, Sumi Jo, is a touch cool at first, too much the pert coloratura but this isn't an impression that persists.
Hers is a performance of wonderful vocal control and flowering sensibility.
Podles, a smoky-voiced Pole, likes to go her own way at times. In the event, though, she and Sumi Jo work well together, and they sound marvellous. Podles also manages, chameleonlike, to adjust to the purer, more obviously stylish Rossini manner of a singer who's very unlike herself, the American tenor Stanford Olsen. His portrait of the conscience-stricken father Argirio matches singing of grace and impetus with great fineness of dramatic sensibility. As a result, something like the scene of the signing of his daughter's death-warrant emerges here as the remarkable thing it is.
Alberto Zedda is lucky to have at his disposal another of those wonderfully stylish chamber orchestras and chamber choirs that Naxos seem able to conjure at will. The aqueously lovely preface to Tancredi's first entrance is a representative example of the players' ear for Rossini's delicately limned tone-painting. The recording itself is beautifully scaled.