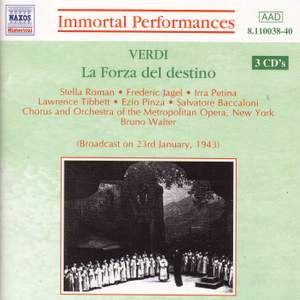 There has never been quite so electrifying a Forza as Walter's vital, brilliantly executed reading, which encapsulates the essence of the forthcoming drama. It confirms what few may know today,... — Gramophone Classical Music Guide, 2010 More…

There has never been quite so electrifying a Forza as Walter's vital, brilliantly executed reading, which encapsulates the essence of the forthcoming drama. It confirms what few may know today, that Walter was a superb interpreter of Verdi. Yet this was the first time he had conducted Forza, so his lithe, finely honed reading is all the more remarkable. The other revelation is the Leonora of Stella Roman, a greatly underrated soprano brought to the Met in 1941, who yields few points to such notable interpreters of the part as Ponselle, Milanov and Tebaldi. They apart, you would go far to hear a Leonora so well equipped for the role, and so committed to it, one who uses her warm, generous voice to unerring effect in projecting the woman's dire predicament.
Padre Guardiano appears in the guise of Pinza, none better, and sounding, one uncertain high E apart, secure, concerned and authoritative. Jagel as Don Alvaro passes easily the test of the taxing aria of sad recollection at the start of Act 3. Tibbett as Don Carlo compels attention at every entry with his distinctive timbre and faultless style, but truth to tell the glorious tone had dulled since his great days in the 1930s and at times he sounds stretched by the part. Both his arias suffer cuts. Carlo's second (of three) duets with Alvaro is also excised as was then the custom, and strettas throughout are foreshortened. Baccaloni enjoys himself hugely as Melitone and obviously relishes his encounters with his superior, the Padre Guardiano, the two Italians revelling in the text.
Petina is a lively but lightweight Preziosilla.
The sound is a bit crackly and restricted but good enough to enjoy an absorbing account of the score. This vivid version has much to commend it at the price.