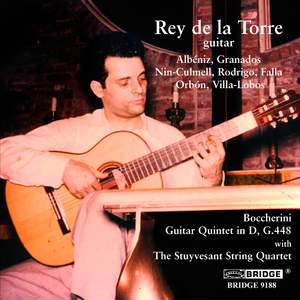 with The Stuyvesant String Quartet

Nin-Culmell: 6 Variations on a Theme of Luis Milán

This CD restores to the catalog one of the most popular classical guitar LPs from the 50s and 60s. Originally recorded for Philharmonia in 1952, it was last released on a Nonesuch/Elektra LP. Also featured is Rey de la Torre’s studio recording of the Boccherini D Major “Fandango” Quintet (the premiere recording of this work, made in 1951) and a live concert performance of Villa-Lobos’s Etude No. 11, issued for the first time.