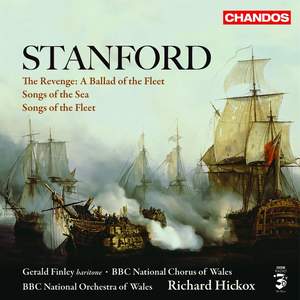 Songs of the Sea - which includes the long-popular 'Drake's Drum' and 'The Old Superb' - and the later, texturally richer and more thoughtful Songs of the Fleet are superb baritone vehicles for... — BBC Music Magazine, July 2006, 4 out of 5 stars More…

I. Sailing at Dawn

II. The Song of the Sou'Wester

I. At Flores in the Azores

IV. He had only a hundred seamen

XI. And the night went down

XIII. And the stately Spanish men

But they sank his body with honour down

Songs of the Sea - which includes the long-popular 'Drake's Drum' and 'The Old Superb' - and the later, texturally richer and more thoughtful Songs of the Fleet are superb baritone vehicles for Gerald Finley… this new Chandos SACD… has impressive presence.

Two of Stanford's catchiest and most popular settings frame his 1904 Songs ofthe Sea for baritone, male chorus and orchestra: both 'Drake's Drum' and 'The Old Superb' are instantly memorable and have alone justly secured the work's survival. But there's some terrific music tucked away in the three remaining numbers, not least the marvellously serene 'Homeward Bound' with its burnished orchestral palette (Stanford's skilful scoring gives enormous pleasure throughout, in fact), rapt eloquence (nowhere more potent than at the line 'Swiftly the great ship glides') and adventurous harmonic scope.
Six years later, Stanford returned to Henry Newbolt's maritime verse to pen a more reflective sequel entitled Songs of the Fleet. Its spacious centrepiece, 'The Middle Watch', evokes a dusky mystery and sense of awe, while the opening 'Sailing at Dawn' is a gloriously assured and noble essay worthy of Elgar himself...Not so immediately appealing is the 1886 choral ballad The Revenge, one of the composer's biggest early successes. Tennyson's poem depicts how Sir Richard Grenville and his Devonian crew aboard Revenge took on – and inflicted terrible damage upon – the Spanish fleet off the Azores in 1591 (one ship against 53 – believe it or not!).
Stanford's breezy setting proved a hit with Victorian choral societies up and down the land.
Though no forgotten masterpiece, it's most ably served by Hickox and company. Throw in an admirable booklet-essay by Jeremy Dibble and ripe, airy sound from Chandos, and it certainly adds up to a hearty recommendation.

…Gerald Finley's firmly focused, ringing tone is a joy. He doesn't possess the salty tang of Benjamin Luxon (a true sea-dog if ever I heard one), but the voice is steadier and he sings with unfailing ardour, intelligence and sensitivity. Hickox and his BBC Welsh forces provide exemplary support.