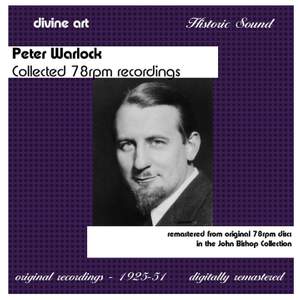 Warlock: There is a garden in her face

Warlock: As ever I saw

Born in 1894, Peter Warlock was one of England’s great songwriters – described by Lennox Berkeley as one of the “most colourful talents in English 20th century music”. His output was prolific. In addition he was a distinguished editor and transcriber of a vast amount of early music as well as an author of several books and many articles, editor and music critic. He was very close to Delius – indeed was obsessed with Delius’s music and wrote a book about him, and also assisted Beecham in organising a Delius festival in 1929. He shared a cottage with fellow composer E. J. Moeran. He suffered bouts of depression and sadly he was found dead in his Chelsea flat in December 1930, of gas poisoning.

Gathered here are the original 78rpm recordings from the John Bishop Collection – divided into Orchestral and Chamber on CD1 and vocal items on CD2. John Bishop was one of the leading lights of the Peter Warlock Society, and all tracks have been remastered by Andrew Rose of Pristine Audio.