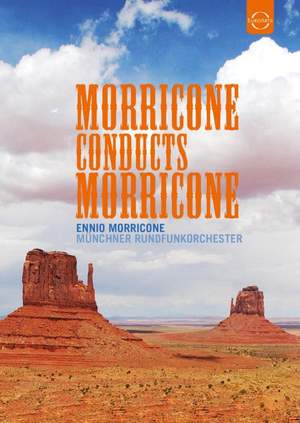 A genuine première and, over and above that, starring the greatest motion picture composer of the present day: Ennio Morricone.

Morricone is well-known to moviegoers his soundtracks are invariably warmly melodic and superbly suited to the films they grace.

This program is a representative collection of his rich creative output and features aselection of his most famous film music including “Il Buono, il brutto e il cattivo” (“TheGood, the Bad and the Ugly”), “C’era una volta il West” (“Once Upon a Time in theWest”, “Giu la testa” (“A Fistful of Dynamite”), “C’era una volta in America” (“OnceUpon a Time in America”, “The Mission”, “Cinema Paradiso”, “The Life and Death ofRichard III”, “Investigation Of A Citizen Under Suspicion”, “The Untouchables” and many more.

Morricone received the Academy Honorary Award in 2007 "for his magnificent and multifaceted contributions to the art of film music." He has also received 5 Oscarnominations and he has won 3 Grammy Awards, 2 Golden Globes as well as numerousother awards, that are too many to mention.

Ennio Morricone is also known for his extensive concert tours and he is planning to be“on the road” very frequently in the near future.