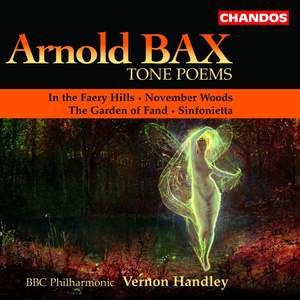 …some of the composer's most powerful orchestral writing receives utterly committed, full-blooded performance, the complex textures ideally balanced and superbly recorded. — BBC Music Magazine, May 2006, 5 out of 5 stars More…

Bax: In the Faery Hills

Bax: The Garden of Fand

In the Faery Hills and The Garden of Fand are among Bax's loveliest and most loveable creations, and though the windswept November Woods is far less tuneful, its emotional undercurrents run unfathomably deep. Bryden Thomson's shimmering, sensuous interpretations of these scores, recorded for Chandos some 20 years ago, laid bare the music's Impressionist roots; Vernon Handley (in an encore to his Gramophone Award-winning set of Bax's symphonies – see page 115) takes a tougher, more vigorous view. The only place he's notably slower than Thomson is in NovemberWoods, yet how much darker and more ominous are the leaden skies that Handley paints. Indeed, even in such sensitive hands as Boult's, some of the stormier passages sound rather like film music, while Handley's deliberate focus on motivic clarity brings out a Wagnerian grandeur and gravity that strengthen the work's narrative backbone.
In The Garden of Fand and In the Faery Hills Handley adopts brisk tempi, occasionally pushing the music into a kind of giddy ecstasy that makes Thomson's fragrant, graceful readings sound downright languorous. If only the BBC Philharmonic were as flatteringly recorded as Thomson's Ulster Orchestra or, for that matter, the RSNO in David Lloyd-Jones's superb Naxos cycle. Lloyd-Jones's dynamic direction is similar in spirit to Handley's, in fact, and almost as arrestingly characterised – but not quite. This restless, syncopated score may not be top-drawer Bax but the Manchester musicians play it with the fervour of true believers.