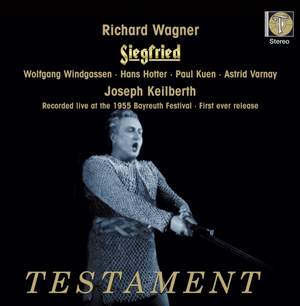 Time and again, as I listened enraptured to this overwhelming performance, I felt as though as I was sitting in the Bayreuth stalls. …Keilberth's… command of every aspect of this vast score... — Gramophone Magazine, March 2006 More…

These 'live' Bayreuth performances were taped by a Decca team led by Peter Andry and including the noted engineers Kenneth Wilkinson and Roy Wallace, with Gordon Parry as assistant. Using a new six-channel mixer designed by Wallace, the team made both stereo and mono recordings of each opera. Three microphones were placed in the sunken orchestra pit and three hung from a lighting bridge about 20 feet above the stage. "This was brilliant; it worked beautifully", remembers Wallace. The company prepared for an expected release, but John Culshaw, recently returned to Decca, vetoed the project. He disliked 'live' recordings and already had plans for a studio Ring with Solti which began four years later.

Time and again, as I listened enraptured to this overwhelming performance, I felt as though as I was sitting in the Bayreuth stalls. …Keilberth's… command of every aspect of this vast score is unerring in balance, detail and overall Schwung. No opera house or recording has since rivalled the cast assembled here, not even the Decca set, by which time Hotter Windgassen and Neidlinger were all some 10 years older. In 1955 all three are at the peak of their form and - singing live rather than in the studio - are that much more involved and involving. Don't take my word for it: buy the discs and experience Wagner as he was supremely performed in those special days...

[Windgassen] is in gloriously fresh voice...Neidlinger too is clear and incisive as Alberich, with Josef Greindl darkly majestic as Fafner...The duetting of Varnay and Windgassen as Siegfried and Brunnhilde then makes a thrillingly passionate conclusion in Keilberth's thrustful reading.