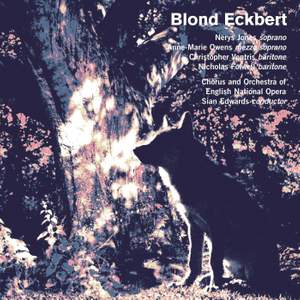 Judith Weir's treatment of Ludwig Tieck's story Blond Eckbert creates a compelling world… with its own ingenious methods of narration, and a strong sense of movement towards an inescapable and... — BBC Music Magazine, January 2006, More…

Act I Scene 1: Eckbert and Berthe at home (Eckbert, Bird)

Judith Weir's treatment of Ludwig Tieck's story Blond Eckbert creates a compelling world… with its own ingenious methods of narration, and a strong sense of movement towards an inescapable and tragic dénouement. Nicholas Folwell and Anne-Marie Owens are sympathetic as the couple at the centre of the story... Sian Edwards draws tidy playing from the ENO Orchestra. ...another chance to discover this remarkable and haunting piece.

Ludwig Tieck's novella Der Blonde Eckbert (1796) is a dark tale of incest and despair made even darker by the ironic framework of a bird's song extolling the peaceful solitude that can be found in nature. Judith Weir, writing her own libretto, has seized on this essential contrast. While her bird sings eloquently, joyfully, her human characters articulate their growing awareness of the horrors that surround them in lines that are questing, often aggressive, though never shorn of the kind of lyricism that best represents vulnerability.
Unfolding over just 65 minutes to an ending suffused with a spirit of tragic radiance, the opera is a gripping, harrowing experience, and admiration of ENO for commissioning it is tempered only by regret at their failure to revive on a regular basis a work of such intense theatricality and musical approachability.
This recording (originally issued by Collins Classics) is not of one of the Coliseum performances but was made for a TV film shown on Channel 4. The balance strongly favours the voices and although most of the pungent, imaginative orchestral details still come across – with the use of brass and woodwind especially telling – the sound highlights a certain lack of nuance in Nicholas Folwell's account of the principal role and conveys little sense of stage movement or action. Nevertheless, Folwell and the rest of the small cast are persuasive, and the music is so immediate in its evocation of pastoral enchantment and menace that any studio-bound quality is far less of a hindrance than would often be the case.