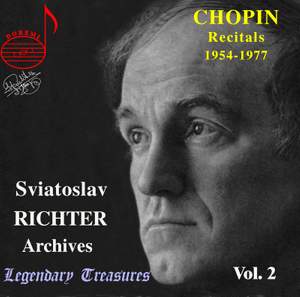 This is the second volume from DOREMI of archival treasures by the great Sviatoslav Richter, in state-of-the-art audio restoration. It contains Richter's historic Chopin selections from live performances in New York (1965), Warsaw (1954), Salzburg (1977) and Helsinki (1976). All items are released here for the first time ever. The New York Times review (April 16, 1965) by Harold C. Schoenberg on the New York recital which included Chopin's 4 scherzi: ''Richter has an enormous projection... he drove the listeners into a frenzy.''