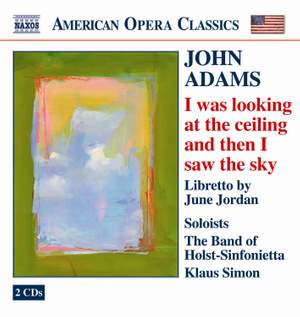 Adams, J: I was looking at the ceiling and then I saw the sky

The Band of the Holst-Sinfonietta, Klaus Simon

John Adams's stylistic range is vast, yet even in such a diverse output, I Was Looking at the Ceilingand Then I Saw the Sky (1995) stands apart. Conceived, in the composer's words, as 'a Broadwaystyle... — Gramophone Classical Music Guide, 2010 More…

Adams, J: I was looking at the ceiling and then I saw the sky

Act I: I Was Looking at the Ceiling and Then I Saw the Sky (Tutti)

Act I: A Sermon on Romance (David, Leila)

Act I: Solo in Sunlight (Dewain)

Act I: Mike's Song about Arresting a Particular Individual (Mike)

Act I: Song about the On Site Altercation (Dewain, Tiffany, Mike, Leila)

Act I: Song about the Bad Boys and the News (Consuelo, Tiffany, Leila)

Act I: Song about Law School as the Natural Follow-up to Jail (Dewain, David)

Act I: Leila's Solo: Alone (Again or at last) (Lelila)

Act I: Song about the Sweet Majority Population of the World (David, Rick, Dewain, Mike)

Act II: Crushed by the Rock I Been Standing On (David, Tiffany, Rick, Consuelo)

Act II: 1 Last Look at the Angel in Your Eyes (Consuelo, Dewain)

John Adams's stylistic range is vast, yet even in such a diverse output, I Was Looking at the Ceilingand Then I Saw the Sky (1995) stands apart. Conceived, in the composer's words, as 'a Broadwaystyle show', it draws its musical inspiration from popular song, moving from doo-wop to gospel, from pop ballad to the blues. The text, a poetic piece of social and political commentary by June Jordan, introduces us to seven young Angelenos whose intertwined lives are transformed by the 1994 Northridge earthquake. There's no recitative, no spoken dialogue; the story is told through song and ensemble. This posed a problem when Nonesuch issued a composer-conducted recording of excerpts in 1998, cutting seven of the 22 vocal numbers. Here, Naxos gives us the complete score.
It hard to state that the narrative flows a whole lot more smoothly when the show is heard in its entirety. There are still quite a few jarring gaps, although one certainly gets a better sense of the characters as well as a heightened sense of drama. Missing from the Nonesuch recording, for example, was the crucial post-earthquake scene involving Tiffany, Mike and Rick – the score's longest number.
As for the performance: the Freiburg-based Holst-Sinfonietta Band plays its intricate part with tightly coiled energy for conductor Klaus Simon; the mostly German cast copes reasonably well with the different American dialects (only Lilith Gardell's Tiffany fails to convince); and although the women's voices can turn shrill Adams Opera when pressed, all the singers sound fresh and youthful. Indeed, Martina Mühlpointner may not have the extraordinary tonal richness of Audra McDonald (Nonesuch) but her wideeyed rendition of 'Consuelo's Dream' – one of the piece's prettiest and most effective numbers – is also deeply affecting. Not all the songs in Ceiling/Sky are as successful as this one but I'd guess that there's enough here to make this daring experiment in American musical theatre attractive to more than just Adams's fans.