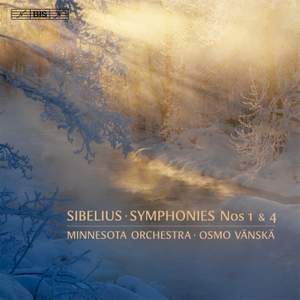 Symphonies Nos. 1 & 4 are poles apart in their musical style and make a highly interesting pairing for this new release. Symphony No. 1 is rooted in the symphonic tradition and has a particular tunefulness reminiscent of Tchaikovsky, whereas Symphony No. 4 is highly original and introverted, often being seen as modern and ‘cubist’ by listeners in the 1890s.

The Minnesota Orchestra and its music director Osmo Vänskä were highly praised for their previous release of Symphonies Nos. 2 & 5 (BISSACD1986), being called ‘a fine start to what may be the benchmark cycle for the 21st century’ by Gramophone, and nominated for a Grammy Award for Best Orchestral Performance.

Vänskä has really enhanced the quality of the Minnesota Orchestra since he took the position of musical director in 2003. He has since had his tenure extended many times and continues to carve an international reputation for the ensemble.

This release has advertising planned in Gramophone magazine as part of a ‘new orchestral features on BIS’.

Another instalment in Osmo Vänskä's next-generation Sibelius cycle, turning from the poetic Lahti orchestra to the full-blooded Minnesota sound. And full-blooded the First certainly is...Altogether, Vänskä's new interpretations, sturdy and intense rather than richly Romantic, offer persuasive alternatives in a crowded market.

On a technical level it sounds impeccable. The polished string sonority, allied to trim woodwinds and meaty brass, gives the performances a completely different atmosphere to Vänskä’s first Sibelius cycle with the Lahti Sinfonia

The passion and sweep of the First...is even more electric than in Lahti...[in the Fourth] this most stylistically advanced of Sibelius's symphonies emerges equally well as a hugely powerful utterance. With superb sound as always from BIS, this new disc has set the bar for all to follow and past ones to be measured against.

Vänskä’s latest thoughts on Sibelius are certainly worth hearing

Vänskä's approach now seems more interventionist; he's less willing to let the music to unfold at its own pace, urging it forward. While that certainly results in a thrilling account of the First Symphony, it does make the brooding opening of the Fourth and some of its later climaxes seem contrived and stage-managed

exceptional: incredibly tense and energetic, yet teeming with detail. The orchestral sound, lithe and sparse, suits Vänskä’s unsentimental approach. Look elsewhere if you want romantic bloom, but I find these crouching-tiger interpretations thrilling.