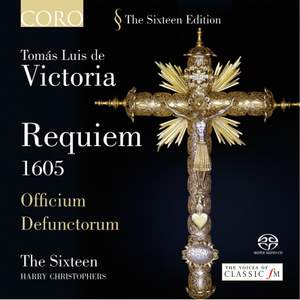 Harry Christophers imbues this account with maturity and assurance as well as a deep understanding of the music's architecture. He inspires some impassioned singing from the choir - plumbing... — BBC Music Magazine, September 2005, 5 out of 5 stars More…

This recording features the celebrated Requiem of 1605, Victoria's final composition and a work of beguiling beauty and sumptuous simplicity. It can be seen as the summation of both his art and the Spanish Renaissance tradition. The beautiful plainsong on which it is structured can be heard arching through the texture, forming a delicate and sinuous line throughout. Subtly accompanied by a chamber organ and bajón, it is recorded here with the same forces as may well have performed it originally in the Monasterio de las Descalzas Reales. The Requiem is preceded by Marian Antiphons interspersed with three motets setting texts from the Song of Songs.

Harry Christophers imbues this account with maturity and assurance as well as a deep understanding of the music's architecture. He inspires some impassioned singing from the choir - plumbing the depths in the Offertory to depict the 'deep pit' and 'the pains of hell', and elsewhere using a range of rhetorical gestures to heighten intensity.

…The Sixteen's new offering… builds on their previous recordings by complementing the voices with a chamber organ and the wonderfully robust-sounding bajón, an early Spanish bassoon whose use in polyphonic performances of the period is well documented.