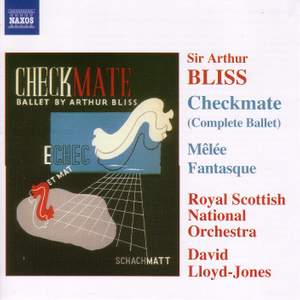 This is the only available version of the full ballet… almost all the music to the same high, full-blooded standard… The early Melée Fantasque is much more than a makeweight… Lloyd-Jones's... — BBC Music Magazine, October 2005 More…

I. Prologue - The Players: Moderato maestoso

VIII. Entry of the Red King and Queen: Grave

This is the only available version of the full ballet… almost all the music to the same high, full-blooded standard… The early Melée Fantasque is much more than a makeweight… Lloyd-Jones's tempos are faster than the composer's, but there's no lack of expansiveness in the elegiac slower episodes that punctuate the effervescent throng. Superbly alert and responsive playing from the RSNO make this disc a real bargain.

Bliss composed Checkmate at the behest of dancer and choreographer Ninette de Valois to mark the Vic-Wells Ballet's inaugural visit to Paris in June 1937. A keen chess player, Bliss devised the scenario himself, the original idea having germinated some 14 years before in a dinner conversation with the Russian ballerina Tamara Karsavina.
Lasting some 53 minutes, it's a mightily impressive achievement, scored with sumptuous skill and crammed full of first-rate, colourful invention, much of which will already be familiar from the six-movement concert suite.
Now comes a compelling account of the complete ballet from David Lloyd-Jones and the RSNO, who respond with commendable polish and ebullient swagger. Lloyd-Jones's characteristically lucid conception possesses just that crucial bit more dramatic tension, expressive scope and thrust – and how pliantly he moulds those ravishing melodic tendrils in 'Entry of the Black Queen' (where there's some particularly disarming wind playing). Some occasionally raucous brass sonorities aside, the engineering is enormously vivid, the slightly unflattering acoustic appropriately akin to that of the theatre-pit.
The Mêlée fantasque (written in 1921 in memory of the painter Claude Lovat Fraser) makes a delightful curtain-raiser, with Lloyd-Jones extracting just that bit more vitality from this by turns exuberant and touching dance-poem than the composer (always an accomplished interpreter of his own music). A real bargain.