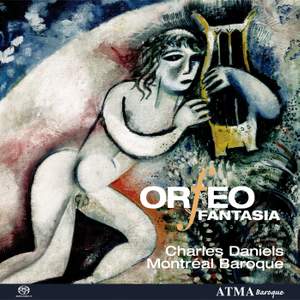 Dowland: The Second Booke of Songs or Ayres: Flow my tears

It is hardly surprising that musicians of the Baroque period were fascinated by the legend of Orpheus, as much for the tragic love story of the mythic couple, as for the ancient Greek belief in the extraordinary power of music. Among the first operas we have two settings of Euridice, the first by Jacopo Peri and the second by Giulio Caccini, as well as Monteverdi's Orfeo. Composers up to Haydn, including Luigi Rossi, Telemann, and Gluck, adapted the tragic story for the stage, and thus evoked the power – which they themselves possessed – of the art of sound. This recording includes diverse pieces of music chosen to evoke the main episode of the myth; they were composed in Italy, England, and France, during the first two decades of the seventeenth century. There are compositions for lute and for harpsichord that suggest the art of Orpheus himself, using his lyre to charm men, beasts, and gods; there are also instrumental pieces and interventions for the hero of Orfeo by Monteverdi. Finally, Italian monodies, airs de cour, as well as airs by John Dowland and Tobias Hume, express the many vicissitudes that weave together the fabric of existence.