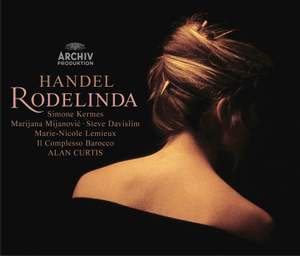 Of available recordings this set has the edge, for its greater dramatic urgency and richer characterisation. — BBC Music Magazine, August 2007 More…

Se per te giungo a godere

Amico, ah, che a me duole

Of available recordings this set has the edge, for its greater dramatic urgency and richer characterisation.

Alan Curtis has done more than most to prove that many of Handel's 42 operas are first-rate music dramas – his Admeto, from 1979 (see page 465), was one of the first complete recordings of a Handel opera to feature period instruments and all voices at correct pitch without transpositions – but it is surprising to note that this is his first recording of an undisputed popular masterpiece.
Rodelinda, first performed in February 1725, is a stunning work dominated by a title-heroine who remains devoted to her supposedly dead husband Bertarido and scorns the advances of his usurper Grimoaldo. The potency of Handel's score was enhanced by the complexity of the villain, whose lust-driven cruelty gradually crumbles into a desire to abdicate in order to find spiritual peace. The scene in which the penitent tyrant's life is saved from assassination by the fugitive Bertarido is among Handel's greatest dramatic moments.
Simone Kermes is full of feisty courage, an assertive woman for whom Bertarido would credibly risk death to be reunited with. She takes no prisoners in some extravagant cadenzas, and sings 'Morrai, si' with thrillingly viscous venom.
At the other extreme, 'Ritorna o cara' is simply gorgeous. There are some weaknesses. Marijana Mijanovic's Bertarido often slips under pitch on long notes and uses indiscriminate vibrato instead of singing through phrases. Her deficiencies with tuning and idiomatic expression are highlighted in two duets with Kermes (one not recorded before), particularly when Handel demands that they sing sustained notes in unison.
There is a good case for using a fruity female contralto in castrato roles instead of an angelic countertenor but why Archiv seems keen to record Mijanovic's inadequate performances of Handel roles for his star castrato, Senesino is incomprehensible. A cursory comparison of Mijanovic's bizarrely unattractive 'Dove sei' with any of the impressive contributions from fellow contraltos Marie-Nicole Lemieux or Sonia Prina indicates that either would have better suited the role.
Otherwise, this has an abundance of good things. Il Complesso Barocco have sounded undernourished on some previous recordings but here play with admirable vitality and dramatic subtlety. Curtis has obviously worked hard to encourage his string players to understand what the singers are communicating: each aria is impeccably interpreted and intelligently paced. On the whole, Curtis's passion and experience ensure another typically persuasive and theatrical vindication of Handel's genius.

Kermes copes splendidly with the enormous range demanded and the feats of coloratura, if with a slight edge at the top...[Mijanovic and Lemieux are] both excellent, with Mijanovic singing nobly in the most celebrated number, Dove sei. Outstanding even in this cast is the Australian tenor, Steve Davislim