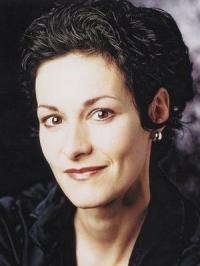 The Serbian contralto Marijana Mijanovic was born in Valjevo in 1974 and trained in Belgrade and Amsterdam, winning several high-profile competitions in the Netherlands whilst a student at the Conservatorium Sweelinck.

She came to international prominence in 2000 after appearing as Penelope in Monteverdi’s Il Ritorno d’Ulisse in Patria under William Christie at the Aix-en-Provence Festival; she has specialised in baroque and early Classical repertoire throughout her career, with key roles including Handel’s Orlando, Radamisto, Bertarido and Giulio Cesare. She recorded the latter role for Marc Minkowski in 2003 (‘Mijanovic is impressive, with a full, flexible bottom-end to the range that puts plenty of counter-tenors to shame’ – BBC), and her discography also includes the solo album Affetti Barocchi: Arias for Senesino, the title-roles in Handel’s Floridante and Francesco Conti’s David for Alan Curtis and Il Complesso Barocco, and Asteria in Vivaldi’s Bajazet with Europa Galante and Fabio Biondi.

Mijanovic is also active as a teacher, director and dramaturg.