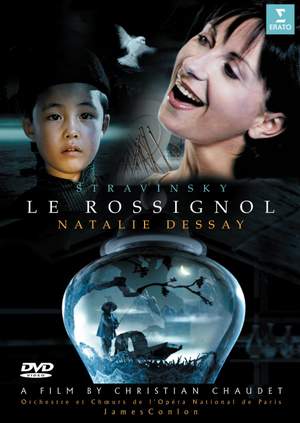 …Stravinsky… would surely have been intrigued, occasionally irritated and ultimately spellbound by Christian Chaudet's vision. Using singers from the original 1999 recording, Chaudet has drawn... — BBC Music Magazine, September 2005, 5 out of 5 stars More…

…Stravinsky… would surely have been intrigued, occasionally irritated and ultimately spellbound by Christian Chaudet's vision. Using singers from the original 1999 recording, Chaudet has drawn fine mimes from them; Dessay's nightshirted soul of the nightingale and Marie MacLaughlin's wide-eyed cook are especially convincing. Inevitably they're dwarfed by the computer-generated animation: in this haunting dream of a Chinese boy... It works surprisingly well. Love it or hate it, Chaudet's world will haunt you long after viewing.

Too many mediocre stage productions are being preserved for vocal, not visual, reasons. All the more important, then, is a release like this where a skilled (and musically literate) film director uses state-of-the-art computer technology to sculpt a multi-dimensional portrait of Stravinsky's gorgeous pre-First World War opera-pantomime.
Christian Chaudet bases it on the well-received EMI recording of 1999, reuniting the major soloists in front of blank blue- and green-screens to act their hearts out to imaginary scenery, effects and people that the computer will supply later.
This technique, long used in feature films, has a range and flexibility that might have been created for 20th-century opera.
The film begins with a fairly traditional dream frame: a little boy 'sees' his father's pottery turn into a Chinese landscape introducing all the story's characters and events. Later, the Emperor who so desires the Nightingale's singing is seen to live in a forbidden city made of chinaware.
This image of communication via images coming to life is developed to include the presence of mobile phones (with the Nightingale's image and song), webcams and computer screens – a modernisation that works through seamless integration with more traditional references.
Relevant instruments of the orchestra are also frequently dropped into view as part of the digital landscape.
Wearing a selection of T-shirts that almost suggest a 1960s Bond girl, Natalie Dessay gives a mesmerising but never indulgent or twee performance as the Nightingale, sometimes with a real bird in the hand. Marie McLaughlin's Cook (who steers the Child through the dream) is equally comfortable and subtle on close-up camera, while Schagidullin, Mikhailov and Naouri exhibit much presence and facial dexterity. From all his players Chaudet has secured that deliberately unemotional and real acting that so distinguishes French (and American) cinema and is such an asset in music-theatre of this genre.
The DVD is of a high visual and sonic quality and (another rarity in opera releases) there are some worthwhile 'extras' not devoted to company promotion. These 'making of' features really show you something of how the film was technically achieved.
On the soundtrack (as we may now call it) James Conlon goes all out for a colour and bite that binds Stravinsky's 1908-09 Debussian Act 1 more closely to the 1913-14, post-Rite of Spring final acts than a trenchant, Boulezian approach might have done, although it is not the only way.
The singing is first-rate (as was the languagecoaching), seeming almost to have been achieved in anticipation of this outstanding film.