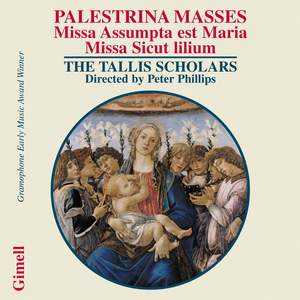 In this recording of Missa Assumpta est Maria Peter Phillips has included the motet on which this work is based, together with another parody mass, the Sicut lilium with its corresponding motet.... — Gramophone Classical Music Guide, 2010 More…

In this recording of Missa Assumpta est Maria Peter Phillips has included the motet on which this work is based, together with another parody mass, the Sicut lilium with its corresponding motet. It's illuminating to hear how the larger-scale compositions unfold with reference to the original motets: close study reveals much about the compositional processes of the High Renaissance, but any listener will be able to appreciate the organic relationship between motet and Mass.
In addition, Phillips has deliberately paired two sharply contrasted parody Masses: Assumpta estMaria, the better known, is thought to be one of Palestrina's last masses, while Sicut lilium dates from relatively early in his career. The former, with its major tonality and divisi high voices, is marvellously bright and open, and is given an outgoing performance; the latter, inflected with chromaticism and melodic intervals that constantly fall back on themselves, is darker-hued and more plaintive, a mood well captured here in the intensity of the singing. But what's perhaps most striking is the difference in compositional technique between the two works: Sicut lilium relies largely onimitative textures for the unfolding of its structure (though there are the customary block chords on phrases such as 'et homo factus est', performed here with magical effect), while Assumpta est Maria makes far greater use of vocal scoring as a formal device, and thus looks forward to the contrast principle of the Baroque.
The Tallis Scholars make the most of the contrasted blocks of sound here, achieving an impressive vocal blend and balance. The phrasing, particularly in the Kyrie, is perhaps a little too mannered and the very beautiful Agnus Dei verges on the narcissistic and therefore becomes too static. The flow in the Missa Sicut lilium, though, is excellent throughout.