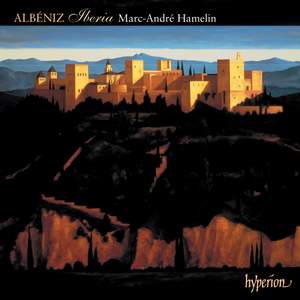 Hamelin again achieves the almost physically impossible with seeming ease. Albéniz's multiple layers are finely balanced, and apparently awkward textures come to life in a lucid acoustic with... — BBC Music Magazine, May 2005, 4 out of 5 stars More…

Hamelin again achieves the almost physically impossible with seeming ease. Albéniz's multiple layers are finely balanced, and apparently awkward textures come to life in a lucid acoustic with pace, grace and a constant sense of dance.

the over-riding impression you're left with is not of breathtaking virtuosity, but of extraordinary subtlety, a range of colours and delicately deployed effects that heightens the introspective imagination of the writing...I can't imagine how this two disc set could be improved, unless it came with two free plane tickets to Seville…

Here's the most immaculate, effortless and refined of all Iberias. Where others fight to stay afloat, Marc-André Hamelin rides the crest of every formidable wave with nonchalant ease and poetry. Did Albéniz, as Rubinstein once claimed, need a helping hand in Iberia, simplifying textures for greater clarity, brilliance and accessibility? Hamelin's musical grace mocks the very question. His 'Evocación', audaciously free and perfumed, makes you hang on every note, and although characteristically cool, elegant and supple, he's true to the heart of Albéniz's incomparable tapestry of southern Spain. Try 'Almeria' and you'll hear playing of jewelled perfection, a mesmerising dreamworld rudely interrupted by 'Lavapiés', where every one of the composer's torrents of notes is made crystal clear.
Again, when has 'Málaga' been played with greater fluency and imaginative delicacy? Perhaps such playing is a compensation for Rubinstein's legendary but never recorded performance.
Certainly in its suppleness and transparency it has a Chopinesque rather than Lisztian bias, but Hamelin gives us all the notes and he's recorded in sound as natural and refined as his playing.
After Iberia there's La Vega, inspired by the plains surrounding Granada, by a 'land of flowers and sapphire skies'. This surely ranks among the greatest recordings of a Spanish piano work.
Limpid, haunting and evocative, it resolves every complexity in rapt poetry. For added measure he gives us 'Yvonne en visite', a hilarious imitation of a pianist who stumbles from note to note, tenacious but incompetent. Finally, there is 'Navarra', complete with William Bolcom's coda, a lengthy and witty résumé and cadenza rather than de Sévérac's brief conclu- Alain Instrumental 15 sion. Comparison with Larrocha's benchmark Albéniz is inevitable. But Hamelin's is radically different in both execution and character, and she, for all her magisterial command, is no match for him in musical grace and fluency.
Hamelin's Albéniz proudly but nonchalantly raises a new and astonishing standard.

Simply put, this is now the recording of choice.