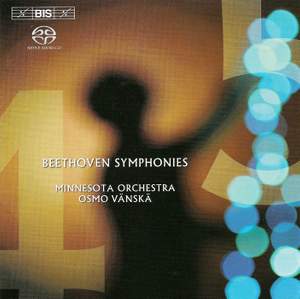 It was during Osmo Vänskä's time with the BBC Scottish SO that his Beethoven began winning golden opinions. His reading of the Fourth is fiery but not relentless. Metronome marks are important... — Gramophone Classical Music Guide, 2010 More…

It was during Osmo Vänskä's time with the BBC Scottish SO that his Beethoven began winning golden opinions. His reading of the Fourth is fiery but not relentless. Metronome marks are important but not mandatory. Transparent textures and a rigorous way with dynamics also feature. Of particular interest is the skill with which he continuously keeps in view the bass line, and thus the music's harmonic contour, never easy, given the 'open' nature of Beethoven's scoring.
The Minnesota Orchestra are extraordinarily proficient: fleet-footed and articulate, though tonally they have less in reserve than the Berlin or Vienna orchestras. This can be a limitation in the Fifth, where the sound occasionally edges towards coarseness but it makes little or no difference in the Fourth, even in the Adagio. What Vänskä sacrifices in lyric poetry he makes up for in justness of rhythm and chasteness of texture.
Skilful as BIS's engineers are in dealing with the quietest passages, finding an optimum playback level for the vibrant but pianissimo-strewn Fourth takes time and patience.
The performance of the dynamically less problematic Fifth also also bristles with character.
Typically, Scherzo and finale are bound to one another structurally but not tamed emotionally.

Osmo Vänskä's readings are full of character and imagination and, in his Minnesota orchestra, he has the perfect ensemble to support his approach.