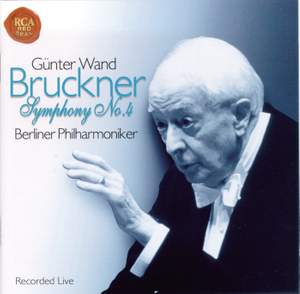 The pacing of each movement is majestic.
Not too fast in the first movement; a slow, contemplative tread in the second; animated, but capable of opening out into something more leisurely in the... — Gramophone Classical Music Guide, 2010 More…

The pacing of each movement is majestic.
Not too fast in the first movement; a slow, contemplative tread in the second; animated, but capable of opening out into something more leisurely in the Scherzo; varied, but with the sense of an underlying slow pulse in the finale. Wand allows himself some fairly generous rubato from time to time, halting slightly on the high unaccompanied cello phrase in the first movement second subject. From the start there's something about his performance that puts it in a different league from rivals. There's the depth and richness of the string sound in the opening tremolo.
A few seconds later the Berlin Philharmonic's principal horn intones the opening phrases so magically and majestically that it's hard to believe you aren't listening to a real voice – a superhuman larynx, not just a contraption of brass and valves.
The sound is, to some extent, the orchestra's own, but there's a feeling that the players are giving extra for Wand, something with more inner life; and the unaffected eloquence and shapeliness of the phrasing is all Wand. It carries you along even when the rubato ought to jar, as it does sometimes in other versions.
This is a concert performance, and feels like one.
Things that work in concert aren't always ideal solutions on a repeatable commercial recording.
Take Wand's big ritardando at the fleeting reference to Brünnhilde's Magic Sleep motif in the finale – the effect might pall after a couple of playings.
But then he does ease very effectively into the weird pianissimo cello and bass figures that follow, triplet quavers gradually becoming triplet crotchets. The sound quality is excellent.