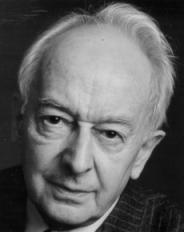 Günter Wand's interest in music was sparked by a performance he attended of Der Zigeunerbaron with Richard Tauber - he was so engrossed in the music that he decided he would become a conductor. After studying at the conservatory in Cologne he became the director of the opera there in 1939, a position he held throughout the war and for some time afterwards.

In 1982 he took charge of the NDR Symphony Orchestra in Hamburg, and made numerous guest appearances with the Berlin Philharmonic - conducting five Bruckner symphonies in the late 1990s and early 2000s.

In his early career Wand was a champion of contemporary composers such as Martin, Messiaen, Ligeti and Varèse, but in his later years he became devoted to the German Romantics and in particular Bruckner, whom he regarded as the 'most important symphonist since Beethoven'.

Find out more at https://en.wikipedia.org/wiki/Günter_Wand