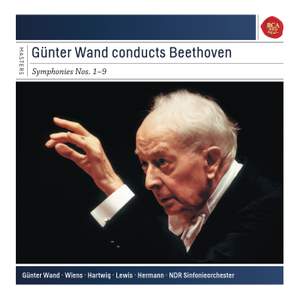 I. Allegro ma non troppo (Happy feelings aroused on arrival in the country)

Once again, the series offers cornerstones of the symphonic repertoire, including two complete cycles. In the late 1980s, Günter Wand, one of the most respected interpreters of the Austro-German repertoire, recorded all the Beethoven symphonies with his Hamburg Radio (NDR) Symphony Orchestra. It is still a benchmark. Reviewing the complete cycle a few years ago, ClassicsToday.com wrote: This is one of the most consistent of all modern Beethoven editions, capped by a Ninth that stands among the select performances of that work on disc ... One of the things that makes these performances so special is Wand s ability to create a truly athletic feeling of movement at any tempo, and in order to do that he has to pay attention not just to tiny details, but also to larger phrases and musical paragraphs ... The Fifth Symphony has all of the grit and grandeur that Beethoven intended ... the funeral march in the Eroica is one of the most noble on disc ... the Pastoral captures the music s earthiness and rusticity with memorable fidelity ... Exceptionally well recorded, this Beethoven cycle belongs in every serious collection.