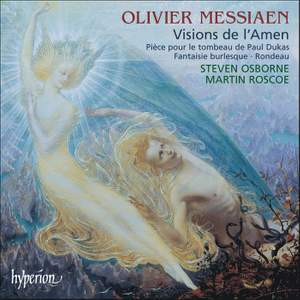 They produce an orchestral range of colour, and there seems to be an eternity of space and time for Messaien's music to vibrate, with its whiffs of incense and flutterings of birdsong. Yet this... — Andrew McGregor, bbc.co.uk, 20th November 2004 More…

Steven Osborne has already made his name as an outstanding interpreter of Messiaen with his ecstatic recording of the Vingt Regards sur lEnfant Jesus (Hyperion, CDA67351/2), which was described by Gramophone as one of Hyperions finest piano recordingsquite an achievement in a catalogue of outstanding piano discs. Here he is joined by Martin Roscoe in an equally revelatory account of Messiaens other great religious piano cycle, this time for two pianos, the Visions de lAmen, composed a year before Vingt Regards in 1943. Their combination of emotional power, religious austerity, keyboard colour and dazzling pyrotechnics makes for an overwhelming and physically exhilarating experience. The listener is given an insight to what it must have been like to have heard the premiere of this work, played by Messiaen with his future wife, the immensly gifted 19-year-old Yvonne Loriod, to a strictly invited audience in Occupied Paris. Steven Osborne plays three solo pieces to complete the disc. The Rondeau was composed at the same time as Visions de lAmen, but is much less musically (although no less technically) ambitious. The other two pieces were composed in the 1930s, one in a more light-hearted vein, the other a contribution to a memorial volume for Paul Dukas, who died in 1935.

They produce an orchestral range of colour, and there seems to be an eternity of space and time for Messaien's music to vibrate, with its whiffs of incense and flutterings of birdsong. Yet this is one of the faster recordings, and the enormous dynamic range (from the most delicate pppp to a Steinway-threatening triple forte) is accommodated superbly by a demonstration-class recording.

It's axiomatic (to use a favourite word of the French) that the Messiaens' own 1962 disc of Visions is irreplaceable. At the same time it raises the common interpretative problem when composers play their own music: should we follow what they say in musical and verbal notes, or what they do? Such problems don't arise with the three early pieces, which hardly show Messiaen at his best, but the metronome mark for the very slow first movement of Visions, which literally sets the groundwork for the cycle, dictates a duration of 6'15". He and his wife, Yvonne Loriod, dispatch it in 4'30". Steven Osborne and Martin Roscoe (like the old Regis recording by Peter Hill and Benjamin Frith) prefer to believe the score, and the result is an impressively relentless sweep from the faintest pppp to a searing fff.
Messiaen's library was full of astonomical picture- books, and his interpretation of the whole work brings out the violence and local disorder involved in the act of creation, even if the ultimate goal (here, a resplendent A major chord) is always in view. This superbly engineered Hyperion disc is true to his Technicolor vision.
Indeed, it's in the rich and immediate piano sound that this version scores most notably over Hill and Frith's, where the playing is no less accurate or intense. Particularly beautiful is a sudden pianissimo early in the fourth movement, and there are some decidedly upfront birds from Osborne in the next. (Messiaen always insisted that townspeople, who knew only the sparrow, had no idea how deafening birds in a forest could be.) In the final movement Osborne and Roscoe throw authenticity aside; their Modéré, joyeux goes uninhibitedly for the second epithet. And wonderfully exciting it is.

Only a pile-up of adjectives, to which should be added coruscating and addictively dithyrambic, could do justice