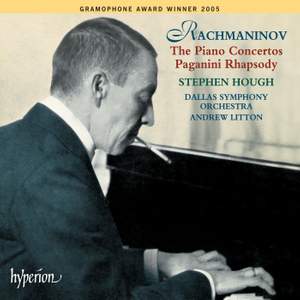 The underrated Fourth Concerto features the Dallas Symphony's stellar brass and winds ideally aligned, plus Hough's balletic projection of the finale's dazzling runs. No less distinct are the... — BBC Music Magazine, November 2004, 4 out of 5 stars More…

Rachmaninov: Rhapsody on a theme of Paganini, Op 43

Ever since we started working with Stephen in 1996 recording these concertos has been on the agenda: its probably been the project closest to his heart. But it took several years before we found the orchestra and conductor that we felt would do justice to this important project. The combination of Dallas and Litton offers a conductor who adores Rachmaninov (he has recorded all the symphonies) and understands the works from a pianists perspective, an orchestra with a glorious and old-fashioned string sound of the kind with which the composer would be familiar, a hall to record in which is one of the best in the world, and lets not forget Stephen Hough who has already won two Gramophone Record of the Year accolades for his concerto recordings. As the results here triumphantly show, all our hopes have been fulfilled, and more. Apart from the Paganini Rhapsody, recorded after a concert performance, these are essentially live recordings. Over a period of eighteen days eleven concerts were given, with each concerto being played several times. From these we have pieced together an ideal performancefree of coughs, noises and the few musical mishaps which occurred, but still capturing the excitement of what was, by common consent, a sensational series of concerts. These days a new recording of the Rachmaninov concertos has to be very special for it to be worth doing at all and it was not lightly that Hyperion proceeded with this project. Stephens very conscious return to the fast and lean performance tradition of the composer himself, avoiding the sentimental Hollywood approach that has become so prevalent, coupled with the supreme level of the performances themselves has truly created a Rachmaninov cycle for the new millennium!

The underrated Fourth Concerto features the Dallas Symphony's stellar brass and winds ideally aligned, plus Hough's balletic projection of the finale's dazzling runs. No less distinct are the First Concerto' deliciously dovetailed rubatos in the first movement and the finale's perfectly gauged rhythmic definition. Overall, these live concert recordings stand out in a field jam-packed with first-rate Rachmaninov concerto cycles.

Hough. Litton. Rachmaninov concertos. Hyperion. Already a mouth-watering prospect, is it not? So, like the old Fry’s Five Boys chocolate advert, does Anticipation match Realisation in these five much recorded confections? The answer is “yes” on almost every level’

magnetic performances that reflect the thoughtfulness and care with which this masterly pianist approaches even the most frequently performed works, his interpretation refreshingly based on indications in the score rather than performing tradition.

Although it's only really the Second Concerto that has become instantly recognisable (through its use as the turbulent soundtrack to the classic film Brief Encounter), all four deserve to be equally famous. Here Stephen Hough, who has made something of a speciality of Russian repertoire, performs the Concertos and the well-loved Rhapsody on a Theme of Paganini, accompanied by the Dallas Symphony Orchestra under Andrew Litton.