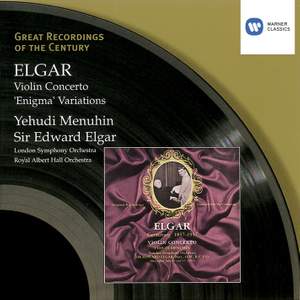 a passing of the musical baton from one generation to the next if ever there was one, and a very moving one at that. Elgar's reading is an aptly broad, reflective one, while Menuhin's playing... — BBC Music Magazine, January 2012 More…

a passing of the musical baton from one generation to the next if ever there was one, and a very moving one at that. Elgar's reading is an aptly broad, reflective one, while Menuhin's playing still astonishes for its technical ease and maturity of insight.

Elgar's conducting for Menuhin in the Violin Concerto's opening orchestral tutti is magnificent, as is his solicitous, attentive accompaniment throughout the work. Menuhin's youthful, wonderfully intuitive musicianship in fact needed little 'instruction', and the success of the recording may be judged from the fact that there have been few periods in the years since it was first issued when it hasn't been available in some shape or form. Beatrice Harrison first studied the Cello Concerto for an abridged, pre-electric recording with Elgar conducting. So impressed was the composer then that he insisted that she should be the soloist whenever he conducted the work again. Their authoritative performance is deeply felt and highly expressive, but it has a quality of nobility and stoicism which comes as a refreshing change from some overindulgent modern performances.
Since the original matrices were destroyed, EMI's engineers had to return to the 1957 tape for this transfer; although the 1957 engineers did not quite capture all the body of the originals there's an impressive clarity in the transfer, now brightened a little more for CD. The 1970s transfer of the Harrison/Elgar Cello Concerto was impressively managed, and this reissue has given still more presence to the sound without any sense of falsification.