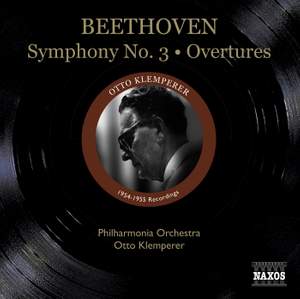 …Klemperer aims for Beethovenian weight, and though his rhythms don’t dance their concentration is gripping. The great wind principals of the 1950s Philharmonic give refinement to the orchestral... — BBC Music Magazine, March 2009, More…

Noted for the heroic quality of his interpretations, in which a loving attention to detail, a remarkable understanding of architectural structure and a keen sense of musical impetus generated compellingly lucid performances, Otto Klemperer was a conductor whose complex artistry combined immense subtlety and powerful directness.

Nowhere was this more evident than in his authoritative readings of Beethoven’s music. The works on this disc, originally issued during the mid-1950s by Columbia and restored by award-winning audio engineer Mark Obert-Thorn, bring pinnacles of Klemperer’s legendary achievement to a new generation of listeners with a remarkable immediacy worthy of the master conductor.

“Otto Klemperer's mono recordings of Beethoven's Symphonies Nos. 3, 5, and 7 are historic in several senses. Not only are they terrific performances by themselves, but they also launched the conductor on the magnificent Indian summer of his career, a period that saw him acclaimed as the greatest interpreter of the basic German repertoire for much of the 1950s and '60s. Klemperer always conducted a sensational Eroica.” Classics Today

…Klemperer aims for Beethovenian weight, and though his rhythms don’t dance their concentration is gripping. The great wind principals of the 1950s Philharmonic give refinement to the orchestral sound.