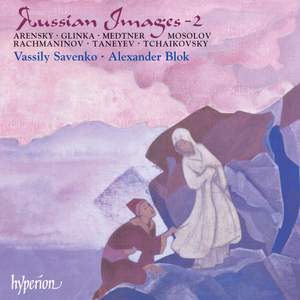 Taneyev, S: And the foes stood trembling (I drognuli vragi) (after Heredia) Op. 26 No. 8

On this CD, Vassily Savenko and Alexander Blok have again drawn upon the riches of Russian vocal art to produce a second kaleidoscope of songs and romances from some of Russia's best known composers, as well as introducing others, including Taneyev and Mosolov, whose vocal music is still in the process of winning new admirers, in Russia and elsewhere. The spectrum is broad, both chronologicallyranging from the 1830s to the 1940s - and stylistically, comprising works by composers of the Russian Nationalist school, the Romantic era, the rich Silver Age immediately preceding the Revolution, as well as the years of the Soviet regime. The choice of songs has been designed to include both well-loved favourites and such unfamiliar material as the Mosolov settings of Pushkin, composed in 1949 but not receiving their premiere in the West until Vassily Savenko and Michael Dussek gave the first performance almost fifty years later.