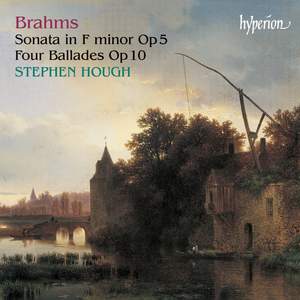 No 1 in D minor. Andante

No 2 in D major. Andante

No 3 in B minor. Intermezzo

No 4 in B major. Andante con moto

Following his recent dazzling Liszt recital (CDA67085), Stephen Hough turns his attention to the finest works of the young Brahms. Brahms's three piano sonatas are early works, culminating with the epic F minor Sonata. Spanning five movements, with dramatic and wildly virtuosic outer movements, and a hauntingly beautiful slow movement (described by Claudio Arrau as "the greatest love music after Tristan, and the most erotic"), this is one of the defining piano sonatas of the mid-nineteenth century. The Ballades Op 10 are essentially miniature tone poems. The first is famously "after the Scottish Ballad Edward", based on a gruesome tale of patricide. Although there are no programmatic hints for the remaining three Ballades, their dramatic contrasts and intense poetry suggest some sort of narrative, even if Brahms did not disclose his inspiration. As well as being attuned to the autumnal introspection of late Brahms, Stephen Hough also has a special empathy with the passion and athleticism of Brahms's early piano writing. This exciting disc confirms his reputation as one of the most distinguished pianists of his generation.