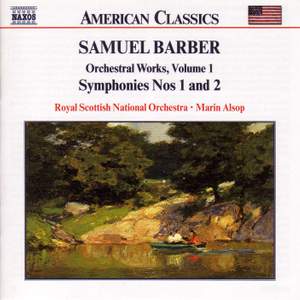 Barber: Overture to The School for Scandal, Op. 5

The School for Scandal, Op. 5

Under Marin Alsop's sensitive guidance, the Royal Scottish National Orchestra has found the heartbeat of this music.

That Marin Alsop is a musician of outstanding gifts is amply reinforced by this all-Barber anthology. In her red-blooded rendering of the wartime Second Symphony, she shows just what a powerfully inspired creation it is, extracting every ounce of sinewy logic from its fraught outer movements, while distilling wonder and atmosphere in the haunting central Andante, unpoco mosso. No less convincing is her reading of the magnificent First Symphony, always acutely responsive to the music's daring expressive scope and building climaxes of riveting cumulative intensity. In its unhurried authority, big heart and epic thrust, it's the kind of interpretation you could have imagined from Bernstein in his NYPO heyday. Elsewhere, she brings an aptly bardic quality to the outer portions of the First Essay, while few could fail to respond to the twinkling affection and gentle wit she lavishes on the irresistible School for Scandal Overture.
Were the orchestral contribution just a fraction more polished, this would be a world-beater.
Zinman's stylish 1991 anthology with the Baltimore SO tends to throw into sharper relief the relative shortcomings of Alsop's hard-working Scots (their fiddles especially lack something in silk-spun refinement and tone when playing above the stave). The expert engineering can't quite disguise the acoustical shortcomings of Glasgow's Henry Wood Hall, but the result is tonally truthful and conveys plenty of impact when required.

the two Symphonies are played by the Scottish orchestra with passionate commitment and deep lyrical feeling.