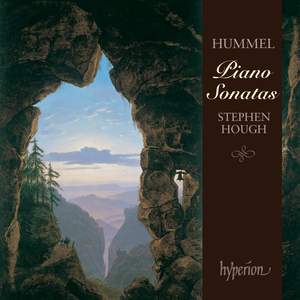 Stephen Hough's splendid issue is in its way as revelatory as his Gramophone Award-winning recordings of the piano concertos. He revels in the element of display which Hummel, one of the leading... — Gramophone Classical Music Guide, 2010 More…

Stephen Hough's splendid issue is in its way as revelatory as his Gramophone Award-winning recordings of the piano concertos. He revels in the element of display which Hummel, one of the leading pianists of his day, must have brought out in his own performances.
These three works are arguably the most interesting of Hummel's nine solo sonatas.
The most radical is No 5, with the composer in 1819 enthusiastically throwing himself behind the new romantic movement. A strikingly angular opening motif leads to an argument which, in a very free rendering of sonata form, brings surges of energy set against moments of reflection; there are many unexpected melodic and harmonic twists and few passages of conventional figuration, such as those that weaken the piano concertos.
The slow movement, too, opens surprisingly, with a heavyweight fortissimo gesture, before settling down to a yearning melody, anticipating Chopin's Nocturnes but more bare in texture, with cantilena echoing bel canto opera.
The finale is a wild Slavonic dance, fierce and energetic in headlong flight, again dotted with unexpectedly angular ideas.
In the Sixth Sonata in 1824 Hummel was rowing back from the romantic stance of Op 81.
The first movement establishes a much lighter tone and is more conventional in structure, exceptionally clear in its presentation of sonata form. The opening theme, for all its lightness of texture, has characteristically quirky twists, and leads to a warmly lyrical second subject, rather like Weber. The second movement Scherzo, the most striking of the four, is a fast mazurka, leading to a slow movement rather like a Mendelssohn Song without Words and a virtuoso finale, light in texture at the start and ending, after all the display, in an unexpected throwaway cadence.
Sonata No 3 in F minor, dating from 1807, again starts gently before developing quirks typical of Hummel. The slow movement then surprisingly has the marking Maestoso, majestic, strong and forthright rather than conventionally lyrical, leading to another virtuoso finale, relatively brief, with cross-hand, Scarlatti-like leaps for the left hand.