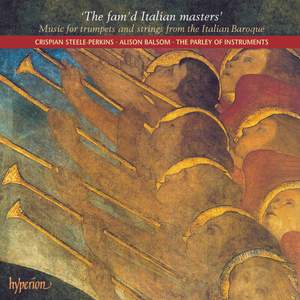 Music for two trumpets, strings and continuo from the Italian baroque

Jacchini: Sonata a 5 in D major

This disc combines the talents of internationally-renowned Crispian Steele-Perkins, and Alison Balsom, a recent graduate currently taking the musical world by storm. Both are in radiant form in a collection of works from that era of Italian baroque music celebrated and loved for its vibrancy and spirit. The lesser-known composers presented here (Melani, Cazzati, Jacchini, Lazzari, Grossi etc) sit happily beside the greats of the era (Vivaldi, Scarlatti, Torelli). Before mid-seventeenth century the trumpet was essentially a ceremonial instrument until German composers such as Praetorius and Schtz began to incorporate it into concert works. This idea was soon adopted elsewhere, and Italian sonatas and concertos form much of the baroque repertoire for trumpet. The accomplished Parley of Instruments play one to a part, reflecting the combination of forces most likely to have been used at the time these works were first performed.