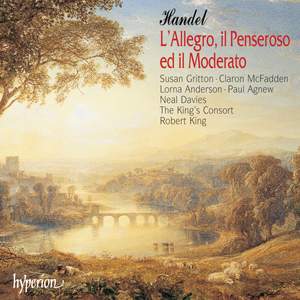 This is the first truly complete recording of Handel's delectable pastoral ode. The early numbers of L'Allegro – literally 'the cheerful man' – have a spontaneous exuberance barely matched in... — Gramophone Classical Music Guide, 2010 More…

Part 1 No 05. Air with chorus. Haste thee, nymph, and bring with thee (L'Allegro)

Part 1 No 09. Accompagnato with chorus. There, held in holy passion still (Il Penseroso)

Part 1 No 13. Air. Sweet bird, that shun'st the noise of Folly (Il Penseroso)

Part 1 No 21. Accompagnato. Mountains, on whose barren breast (L'Allegro)

Part 1 No 22. Air with chorus. Or let the merry bells ring round (L'Allegro)

Part 2 No 05. Chorus. Populous cities please me then (L'Allegro)

Part 2 No 07. Accompagnato. Me, when the sun begins to fling (Il Penseroso)

Part 2 No 10. Air. And ever against eating cares (L'Allegro)

Part 2 No 12. Air with chorus. These delights if thou canst give (L'Allegro)

Part 2 No 13. Recitative. But let my due feet never fail (Il Penseroso)

Part 2 No 17. Chorus. These pleasures, Melancholy, give (Il Penseroso)

Part 3 No 5. Recitative. No more short life they then will spend (Il Moderato)

Part 3 No 7. Duet. As steals the morn upon the night (Il Moderato)

Part 3 No 8. Chorus. Thy pleasures, Moderation, give (Il Moderato)

This is the first truly complete recording of Handel's delectable pastoral ode. The early numbers of L'Allegro – literally 'the cheerful man' – have a spontaneous exuberance barely matched in Handel's output, while much of the music of Il penseroso ('The melancholy man') attains a contemplative ecstasy found elsewhere only in parts of Theodora. The whole work is suffused with an almost pantheistic sense of wonder and delight in the natural world. While alive to the al fresco gaiety of numbers such as 'Mirth, admit me of thy crew' and 'O let the merry bells', Robert King gives full value to the tranquil reflectiveness that lies at the core of the work, favouring broad tempos and gravely expressive phrasing. Occasionally, as in the soprano aria 'Straight mine eye hath caught new pleasures', his approach seems a shade too reverential.
But for the most part he directs this glorious music with affection and relish, abetted by vivid orchestral playing and a typically responsive contribution from the chorus.
Susan Gritton is a soprano of rare accomplishment, with a warm, pure, yet highly individual timbre and a wonderful feeling for the broad Handelian line. Both the scena 'Come pensive nun' and the romantic nocturne 'Oft on a plat of rising ground', with its haunting evocation of 'the far-off curfew', are intensely moving; and, with the cellist Jane Coe, she makes an eloquent case for the long florid aria 'But O! sad virgin', omitted in the Gardiner recording. Lorna Anderson, if a mite less secure above the stave, brings an appealing plangent tone to the nightingale aria 'Sweet bird' (done complete here, whereas Gardiner makes drastic cuts) and a trancelike absorption to the sublime 'Hide me from Day's garish eye'. Some slightly odd vowel sounds apart, Claron McFadden's bright, eager tones and nimble coloratura serve the more extrovert arias well; Neal Davies is sturdy in his bucolic hunting number and mellifluous in his minuet aria in Il moderato; and Paul Agnew is personable and stylish, though his legato is rather shown up by Susan Gritton's in 'As steals the morn'.