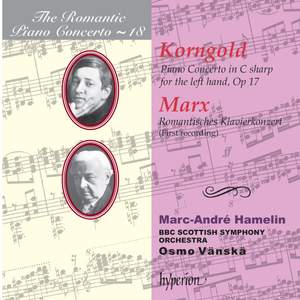 Super-virtuoso Marc-Andre Hamelin plays two of the lushest products of late Romanticism. The Marx concerto, long awaited by pianophiles the world over, is a first recording. Written in the 1930s, it is perhaps closest in style to Richard Strauss with its gushing melodies and rich orchestration. The Korngold left-hand concerto was written (like that of Ravel) for Austrian pianist Paul Wittgenstein who had lost his right arm during the First World War. It is Korngold at his most experimental and features a very large and colourful orchestra, and a particularly demanding (and awkward) piano part.

Hamelin is an ideal soloist here, despatching Korngold's fiendishly demanding piano writing with effortless aplomb, and there is fine playing from the BBC Scottish Symphony Orchestra under Osmo Vänskä.