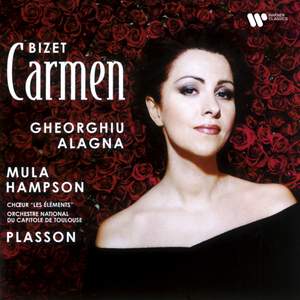 Michel Plasson draws some very fine playing indeed from the Toulouse orchestra, and his choice of speeds seems just right, never resorting to extreme effects. The one moment when things get a... — Gramophone Classical Music Guide, 2010 More…

Michel Plasson draws some very fine playing indeed from the Toulouse orchestra, and his choice of speeds seems just right, never resorting to extreme effects. The one moment when things get a bit sluggish is in the Card scene, but he is, perhaps rightly, more concerned with letting Gheorghiu have as much breathing space as she needs; the chest tone she uses for the cries of 'La mort!' is amazingly forceful. Her portrayal has little of the easy sensuality of such celebrated interpreters as Grace Bumbry or Teresa Berganza.
But Gheorghiu and Roberto Alagna have obviously worked very hard to achieve some fine moments, a beautifully soft ending to 'Là-bas, dans la montagne', and an almost visible change of mood towards the end of the Séguedille, as Carmen begins to work her charms. Gheorghiu can't help sounding rather imperious at times, and there's no exchange of remarks at the moment when she throws the flower.
Alagna has done nothing better recently: he's really inside the character, and portrays the man's descent into degradation. There's little sense of him pushing the tone – as in his Manrico – although his voice is much lighter than many other famous Don Josés. This is all in his favour, though, for moments such as the beautifully realised ending to 'Parle-moi de ma mère'.
Other roles are well taken: Thomas Hampson presents Escamillo as a very jovial sort of fellow, Inva Mula as Micaëla is better in the Act 1 duet than she is in her aria. The sound is uncomplicated, though Carmen's castanets (some very classy playing) seem to be coming from quite a distance away from her.
With dozens of Carmens available on disc, it's impossible to recommend only one. This will be a pleasure for the many admirers of Plasson, Gheorghiu and Alagna. Once you get to the final duet in this 21st-century Carmen, you should find yourself completely gripped – by Alagna, who, while sounding distraught, still manages to produce some lovely tone, and by Gheorghiu, who, though she may never sing the role on stage, is a remarkably dramatic lady-indistress for the microphone.