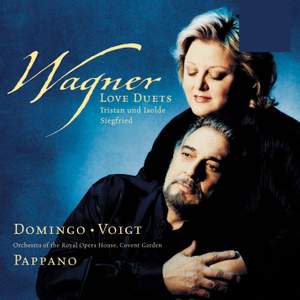 It appears that in 1862, three years before Tristanand Isolde's première, Wagner hoped that the Schnorrs, his original Tristan and Isolde, would give part of the Love duet in a concert performance.
This... — Gramophone Classical Music Guide, 2010 More…

It appears that in 1862, three years before Tristanand Isolde's première, Wagner hoped that the Schnorrs, his original Tristan and Isolde, would give part of the Love duet in a concert performance.
This never took place, and nothing was known about the musical preparations Wagner made for the event until 1950; even then it seems the material remained unexamined, and certainly unused, until very recently. Omitting the first 15 minutes or so, the duet was to start at 'O sink hernieder' and continue to the end, including in it the interpolations of Brangäne. The question which forms in the listener's mind as the end approaches is how that's to be managed.
This supreme expression of eroticism in music culminates in erotic catastrophe. It's hard to imagine a concert performance ending with the rude abruptness of the score, but worse to think of its possible closure (as in some early recordings) on a glib and alien major chord. However, without giving the game away, the solution constitutes a stroke of genius; it has that kind of simplicity and rightness that evokes a cry of 'But of course!', almost as though one had thought of it oneself – which assuredly one had not. Unfor- tunately the booklet-notes provide no information on the genesis of this ending. Amazing as it is to relate, Domingo's voice, after all these years and all this unsparing usage, is still the most beautiful – the most richly firm and even – on recordings of this music. He's exact and lyrical in his reading of the music and is largely, if not invariably, imaginative and convincing in his dramatic commitment. Voigt impresses as being less successfully 'in character', especially as the Siegfried Brünnhilde, whose exaltation and wonder lack the majesty of her godly state as they do the excitement of her humanity. The fresh and vibrant tones are good to hear even so, as is the firm-voiced mezzo of Violeta Urmana's Brangäne. The Covent Garden orchestra play for Pappano with fine attentiveness and exhilaration, and he seems to bringa renewing spirit to everything he touches.