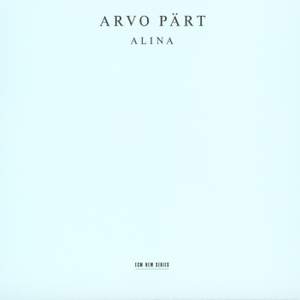 Vladimir Spivakov, particularly, is breathtaking in his two performances of Spiegel im Spiegel, his control of tone and carefully considered use of vibrato adding greatly to the poignancy of... — BBC Music Magazine More…

In response to its frequent use in television and film, Chris ponders the Estonian composer’s 1978 composition ‘mirror/s in the mirror’ and alights upon a favourite recording.

ALINA offers an unusually pure distillation of Arvo Pärt's mature music, distinguished by what the composer refers to as the 'tintinnabuli style' in which simple scalar melodic phrases are suspended over slowly repeated triadic arpeggios to create a timeless sense of enfolding movement. The disc itself has an enfolding structure--three performances of 'Spiegel im Spiegel' (Mirror in Mirror) are separated by two performances of 'Für Alina'--creating a hall of mirrors to mimic the symmetry of the music, and giving the proceedings as a whole a potent and sustained atmosphere of meditative ritual. As the central performance of 'Spiegel' is of a version for cello, the overall form of the ritual is ABCBA, a perfect arch through which to see the delicate geometry within. This is a notable case of programming in which the whole is made much greater than the sum of its parts.

Vladimir Spivakov, particularly, is breathtaking in his two performances of Spiegel im Spiegel, his control of tone and carefully considered use of vibrato adding greatly to the poignancy of the music.