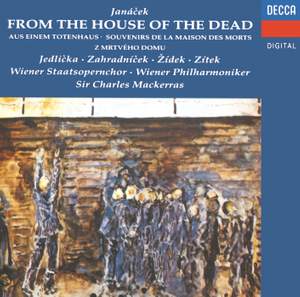 From the House of the Dead (the 1980 Gramophone Record of the Year) was here recorded for the first time in its proper, original version; and this revealed it as even more of a masterpiece –... — Gramophone Classical Music Guide, 2010 More…

From the House of the Dead (the 1980 Gramophone Record of the Year) was here recorded for the first time in its proper, original version; and this revealed it as even more of a masterpiece – a work, indeed, to count among the handful of masterpieces of 20th-century opera. The loss of the final chorus, a sentimental addition, is but the most striking of the clarifications: throughout, the sound is sharper, the textures are sparer, and this serves to sharpen the effect and to give the singers more clearly differentiated support. The cast is led, nominally, by Goryanchikov, but the character isn't really the hero of an opera that has no heroes, and in which all are heroes, though Dalibor Jedlicka sings him warmly and well.
The prisoners are skilfully contrasted in Janácek's writing so as to make an apparently random yet actually well-structured group; there isn't a weak performance among them.
The Makropulos Affair does have a heroine, in the tragic figure of Emilia Marty; and here Elisabeth Söderström gives one of her greatest recorded performances. She succeeds amazingly in conveying the complexity of the character, the elegance yet flinty cynicism, the aloofness yet vulnerability, the latent warmth that can flower into such rich expressive phrases and then be reined in with a sense of nervy panic. She's only really alarmed by Prus, the most formidable of the men around her, powerfully sung by Václav Zítek. Mackerras is again masterly. This is a recording to set among great performances of it.
As with From the House of the Dead, there's an essay by John Tyrrell that not only gives the listener the best possible introduction to the opera but is also a contribution to scholarship.
The fillups, Mládi and the Nursery rhyme, come from David Atherton's splendid 1981 set of five LPs devoted to Janácek; the Lachian Dances set is a rather less successful companion to Makropulos.

With one exception, the Decca cast is superb, with a range of important Czech singers giving sharply characterized vignettes. The exception is the raw Slavonic singing of the one woman in the cast, Jaroslana Janska...but even that fails to undermine the intensity