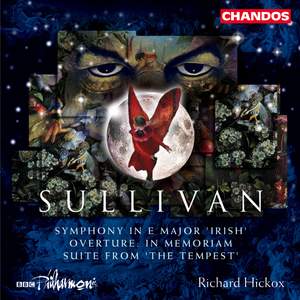 Plaudits all round to Richard Hickox and his excellent Manchester band (and the Chandos production team) for at last granting Sullivan's Irish symphony the first wholly recommendable digital... — Gramophone Classical Music Guide, 2010 More…

Sullivan, A: Overture 'In Memoriam'

Sullivan, A: The Tempest Suite, Op. 1

No. 10, Dance of Nymphs and Reapers

Plaudits all round to Richard Hickox and his excellent Manchester band (and the Chandos production team) for at last granting Sullivan's Irish symphony the first wholly recommendable digital recording it so richly deserves. And what a charmer of a work it is! Mendelssohn (and his Reformation Symphony above all) provides the dominant stylistic template, but the work is soundly constructed, effectively scored, and the scherzo's irresistibly perky oboe tune, in particular, already reveals a very real melodic gift. Hickox observes the first-movement repeat, but his direction is highly imaginative and he never allows tensions to sag. What's more, the playing of the BBC Philharmonic ideally combines bright-eyed affection, keen vigour and nimble polish.
Following the symphony's successful March 1866 première under August Manns, Sullivan was asked to provide a work for that same year's Norwich Festival. The sudden death of his father just a few weeks before the festival proper jolted Sullivan into penning the likeable overture, In Memoriam. In terms of inventive freshness and orchestral scope it's rather trumped by the astonishingly confident incidental music for Shakespeare's The Tempest that Sullivan had written nearly six years earlier while still a student at the Leipzig Conservatory. Again, Hickox and company do plentiful justice to Sullivan's precocious inspiration. A thoroughly enjoyable collection, then, accorded sound of glowing realism in the finest Chandos tradition.