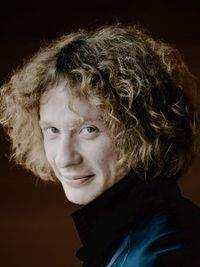 Santtu-Matias Rouvali was born into a musical family in Lahti in 1985, beginning his musical career as a percussionist and training at the Sibelius Academy, where he worked with Hannu Lintu and Leif Segerstam.

In 2012 he was appointed chief conductor of the Tampere Philharmonic, following several guest-appearances; his discography with the orchestra includes the Sibelius, Nielsen, Korngold and Rózsa Violin Concertos with Baiba Skride. In early 2019 he began a Sibelius cycle with the Gothenburg Symphony Orchestra (of which he became chief conductor in 2017) on ALPHA, with the first volume attracting praise for its ‘startling defined’ colours (Gramophone) and his ‘skills in controlling speeds and balancing moods’ (The Times). He has also recorded with the Oulu Philharmonic and Copenhagen Philharmonic, and is a principal guest conductor of the Philharmonia Orchestra.

Find out more at https://en.wikipedia.org/wiki/Santtu-Matias_Rouvali