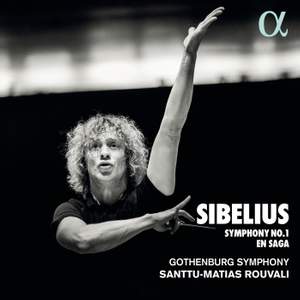 Alpha begins a complete cycle of the symphonies by Sibelius (and of his symphonic poems) with the Gothenburg Symphony Orchestra and its new musical director, Finnish conductor Santtu-Matias Rouvali. Originally a percussionist, the 33-year-old trained at the famous Sibelius Academy. His career took off after he stepped in at the last minute to conduct the Finnish Radio Symphony Orchestra. In the great tradition of Finnish conductors, Santtu-Matias Rouvali is known for his extremely physical and organic interpretations: ‘Music unmistakeably flows from him,’ commented The Sunday Times. When Bachtrack asked him how he shapes the orchestral sound, he replied: ‘I sing it, I move my hands the way I want it (…) the conductor should be able to show tempo somewhere in the body (…) I was also a drum kit player, so my feet and hands can do different things at the same time. When you read the score, you sing it in your head (…) I think it’s the sense of inside groove that you get from playing percussion which is very important in Sibelius’s music.’

In the Gothenburg Symphony Orchestra (GSO) he finds a prestigious cohort of musicians with an impressive discography, and joins a line of their illustrious musical directors, notably Neeme Järvi, the orchestra’s principal conductor from 1982 to 2004, but also Gustavo Dudamel – who made his first major recordings with the GSO – Christoph Eschenbach, Kent Nagano, and others.

Rouvali’s pacing, for the most part, feels instinctively ‘right’…The recording in Gothenburg’s wood-lined Concert Hall offers sonorous, yet clear lower textures, and if the high strings and trumpets occasionally generate a slight ‘edge’, this is not inappropriate to the Symphony’s more Tchaikovskian moments of passion. In all, this is a genuinely competitive release.

This is one terrific disc...Everything about this performance [of the Symphony] is clearly, startlingly defined. A penetrating ear is held to the score...The Gothenberg Symphony have rarely sounded more committed...So I doubt there’s a more gripping account of the symphony currently to be found – and it comes in tandem with an equally impressive reading of the 19-minute epic that is En saga.

The young Finnish conductor nails his vivid colours firmly to the mast in this first instalment of a projected Sibelius cycle with Gothenburg, which on this evidence will be cast in a completely different mould to the same orchestra’s grandly expansive recordings with Neeme Järvi in the 1980s. If the unsettling, proto-modernist account of En Saga gripped me more than the symphony, this is nonetheless a Sibelius series to watch.

There are chunks here, as in the filler tone poem En Saga, where the music-making positively blazes, waving the flag for an independent Finland, free from the claustrophobic embrace of Russia at the end of the 19th century. We get proof, too, of Rouvali’s skills in controlling speeds and balancing moods. Yet in interpretive terms Rouvali doesn’t do anything particularly remarkable.