With principal positions with numerous London orchestras and an extensive discography of concertos and chamber music under his belt, Jaime Martín was at the top of his game as a flautist when an invitation to work with a Spanish youth orchestra kickstarted what was to become an equally distinguished career as a conductor. Almost a decade on, he has several fine recordings to his name in his new capacity (including a delightful disc of Mozart wind concertos with the London Symphony Orchestra, released in late 2021), and is poised to give his first concerts as Chief Conductor of the Melbourne Symphony Orchestra.

We spoke before Christmas about what prompted his transition to a full-time conducting career, the people who supported and inspired him along the way, working with former wind-section colleagues on that new Mozart recording, and his plans for his first season in Melbourne...

You enjoyed a very successful career as a flautist before taking up the baton full-time – was a transition into conducting at some point always on your agenda, or was it inspired by some of the conductors you worked with during your time as an orchestral musician?

Even back when I was a music student the conducting thing was in the back of my mind. I studied flute in my hometown Santander and at the Madrid Conservatoire, then I went to The Hague when I was about 19 and took a conducting class there, so I was actively interested by that stage in my life. I think what sparked that interest was when I became a member of the European Community Youth Orchestra (now the European Union Youth Orchestra) in 1987: the first thing I did with them was Gurrelieder at the Berlin Philharmonie with Claudio Abbado, and the soloists included Jessye Norman, Brigitte Fassbaender and Philip Langridge. That was an amazing experience, and I remember thinking ‘If I start conducting now, I’ll never get to work with Claudio Abbado again!’.

So it was really a very selfish thing, to be honest: in my second year we went on tour with Zubin Mehta and Ravi Shankar as the soloist, and my attitude was ‘If I’m good enough at playing the flute to be working with these people, then I’m content!’. Not long afterwards I was very lucky to start working as a flautist in London: I was Principal Flute of the Royal Philharmonic Orchestra when Daniele Gatti was Chief Conductor, then with the Academy of St Martin in the Fields and the Chamber Orchestra of Europe (again with Abbado), so I was having a ball! I wasn’t missing anything in my life at that point.

The conducting career came much later – nine years ago I was still Principal Flute of the London Philharmonic Orchestra, so it’s still pretty new in the grand scheme of things! It all started when a youth orchestra asked me to conduct a concert in Spain; the reason they asked me was that the orchestra was part of a festival which invited me to coach every year, and because I was so busy as an orchestral musician I always had to say no. Sometimes when you turn one invitation down people don’t bother asking again, but fortunately these guys kept going! The man who was organising the festival eventually said ‘Look, we also have a youth orchestra which you could conduct if that would make the proposition more appealing…’, so I thought ‘You know what? Let’s give it a go’ – even though it was nearly thirty years since I’d done any conducting!

And how did you make the transition from that experiment to a full-time career as a conductor?

My professional breakthrough came a few months later, in the form of a joint concert in my hometown with Neville Marriner; Neville did Beethoven 5 in the first half, and after the interval he came on stage with me and literally put me on the podium to conduct Beethoven 3! Afterwards invitations to conduct started coming in fairly quickly: a year later the Royal College of Music (where I was a professor at the time) asked me to do a concert with their symphony orchestra, and one of the London agents came along and asked me to sign up with them. So it was all very organic – it wasn’t like I made a big decision to become a conductor, but somehow it happened before I realised! Eventually it became clear that I’d have to leave my job at the LPO if I wanted to pursue it seriously, so I did and here I am!

Did your conducting technique evolve as organically as your career on the podium, or did you seek out any particular mentors once things started to really take off?

I haven’t had formal lessons since I was a student, but I spent hours and hours talking about conducting with Vladimir Jurowski (who was Principal Conductor of the London Philharmonic Orchestra during my time as Principal Flute there) and with Yannick Nézet-Séguin, who was a Principal Guest Conductor. I was so very lucky to have both of them around at that time, right at the beginning when I was starting to go out and do concerts with professional orchestras; afterwards they’d always ask how things went, and we’d talk about not only the musical and technical aspects of conducting but also the psychological elements.

Did you also have some experience at directing from the flute before you focused on conducting in its own right?

Yes, I’d done a lot of that over the years. In a way it started with the Academy of St Martin in the Fields; Neville of course conducted the whole ensemble in larger works, but smaller-scale pieces were often directed from the violin by Iona Brown. We did lots of tours with the orchestra where everybody was standing up for things like the Bach Suite in B minor, Brandenburg 5, and lots of Mozart concertos.

I did the Mozart flute concertos with ASMF many times, and when you’re standing up front you have to somehow direct the orchestra; after we recorded them people started saying: ‘Jaime, you seem very comfortable up there telling us this and that - why don’t you try conducting?’. But at that stage the idea of directing something bigger, without the flute there in my hand, was very different and a bit daunting. I have doubled up as soloist and director a few times since I started conducting for real: we did the Mozart concertos with the Swedish Radio Symphony Orchestra, and I also did some Bach with my orchestra in The Hague. But I don’t know if it’s something I’ll go back to in the future: I haven’t played the flute in years now.

This is your first recording conducting the London Symphony Orchestra – how far does your relationship with the orchestra go back?

When I first came to London I played with them on a six-month trial, and I returned a few times over the years; in fact I ended up marrying their Principal Bassoon! And I’ve also played with many of the musicians on the recording in different contexts: Neville's son Andrew Marriner, of course, played with the Academy of St Martin in the Fields, and I’ve also worked with Tim Jones the Principal Horn, Olivier and Juliana the oboists (I worked with Juliana out in Sweden before she became Principal at the LSO), and obviously my wife! When I’m conducting a concerto the most important thing to me is to make my soloist as comfortable as possible, so all of the tempos are the soloist’s decision.

…and presumably you also give them free rein with cadenzas? I must say I’d never heard anything quite like the one in this recording of the Oboe Concerto before!

I don’t think anybody had heard anything like that before! Olivier came to the rehearsals with two different cadenzas, one of them quite traditional and the other completely galactic (which is what you hear on the recording): both of them were written by his wife, who’s a composer, and we were completely knocked out by them in rehearsals.

You take up your new position at the helm of the Melbourne Symphony Orchestra in the New Year – what’s planned for your first season?

I have my first concert with them as Chief Conductor in February 2022, and I wanted the theme to be about beginnings: in the opening concert we have Haydn’s Symphony No. 6 Le matin, a world premiere by Deborah Cheetham (which is a sort of 'welcome gift' from the board!), and then Mahler’s Symphony No. 1. We’ll be doing a lot of concertos to showcase the many wonderful musicians in the orchestra, and for the second programme I wanted to consolidate that by doing the Bartók Concerto for Orchestra. In August there’ll be a new piece by Brett Dean, with whom we have a deep relationship, and we also have a fantastic choir so we’ll be doing a Verdi Requiem towards the end of the year. So there are lots of different projects coming up, and I’m very much looking forward to it all: the first time I worked with this orchestra we just seemed to click and really enjoy making music with each other. 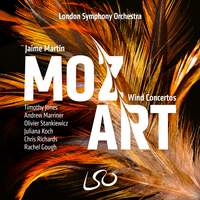 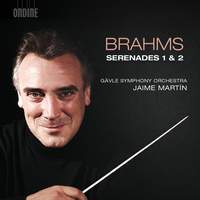 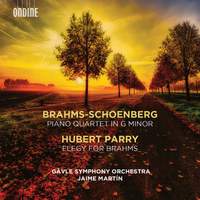 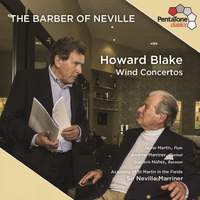 The Barber of Neville

Academy of St. Martin in the Fields, Sir Neville Marriner