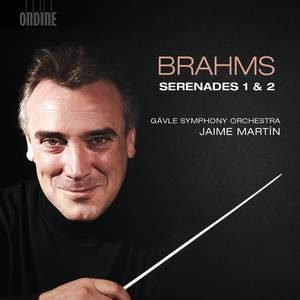 This Ondine recording is the first instalment in a series of Brahms recording with the Gävle Symphony Orchestra and their chief conductor JaimeMartín. Together with the orchestra Martín offers delightful interpretations ofthese two early examples of Brahms’ orchestral writing.

Jaime Martín became the Artistic Director and Principal Conductor of GävleSymphony Orchestra in 2013. During recent years orchestral engagementshave led the rising conductor to collaborate with several prominent orchestrasaround the world. Martín is also Chief Conductor of the Orquestra deCadaqués and known for his active career as solo flautist.

I like the Gävle strings’ trenchant leap into the development section, and they maintain a fine control of those oscillating figures …Jaime Martín is not seeking hidden depths in the Adagio, which flows in unaffected fashion…it’s a disc to raise the spirits

In sum, the Gävle Symphony Orchestra under Jaime Martín give refreshing and well recorded accounts of the Brahms serenades. The competition can’t be ignored…they win on sheer charm.

[No. 1] gets a winning performance from the Swedish orchestra and its affectionate Spanish maestro.

Despite occasional thickening of textures, there’s some lovely playing, with warm woodwind and horns and nice, crisp syncopations. Martín does not allow the tempi to drag: important in works that need to be kept agile and alert to reveal their special charm.

every so often comes an issue that is so musically intelligent in terms of repertoire, so well performed with regard to musical understanding and so well recorded that it reaffirms one’s belief in the medium in terms of cultural enlightenment. This is such an issue…It is comprehensively recommended to all Brahms lovers and to all those keen to hear great music well performed and presented

these are vibrant, gutsy readings

[a] characterful, lucid and glowingly affectionate pair of performances. Martín chooses sensible speeds, possesses a keen ear, and elicits a thoroughly tasteful, poised and eager response from his colleagues…most enjoyable!